The entrance to the Minnesota tent at the Foire de Tours

In May, nearly 100 Minnesotans traveled to Tours, Minneapolis’s sister city in France, to showcase the north star state at their regional exhibition called the Foire de Tours. Each year, the Foire, a ten day event, selects a region or country to feature as part of its fairgrounds. Minnesota was invited this year as 2017 commemorates the 100th anniversary of the American arrival in France during World War I.

In addition to the exhibition space which highlighted aspects of Midwestern life from archival photos from the Minnesota Historical Society to music from Minnesota Public Radio’s The Current, the Foire also featured gastronomic specialties from Minnesotan Sean Sherman, a member of the Oglala Lakota tribe and known as the “Sioux Chef.” Members of the official delegation from Minneapolis were treated to

A non-alcoholic drink named after Minnesota’s baseball team, the Twins, featured orange juice, bananas, pressed lime and Grenadine. While walking through the Foire, a member of the Minneapolis delegation was approached by a high school student from Tours who had studied in the city of lakes. When asked how he liked Minnesota he simply replied, “It wasn’t very French.”

For our first night in Tours, we were invited to the opening of an exhibition at the Chateau de Tours featuring nearly 50 World War I posters on loan from the Weisman Art Museum. Afterward, we headed to City Hall for the opening of La Presence des Americains a Tours 1917-1919, which highlighted the role the city played as a supply base during the epic conflict then known as “The Great War.” 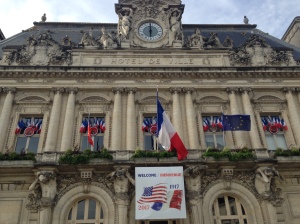 The city hall of Tours, an official polling place for their presidential election

As the city hall served as an official poling place for their presidential election, we were granted special access to observe their election day process. Leading up to the vote, residents were noticeably nervous about the outcome, with one remarking to me, “Well, we’re all just praying for Sunday.” On Sunday evening, we joined approximately 100 people in the main room at city hall where results were coming in on a big screen television. A cheer and audible sigh of relief went up as the crowd was made aware of the victory of Emmanuel Macron, the youngest man ever elected to the French presidency.

At the Cimetiere la Salle, we inaugurated a memorial dedicated to the American

soldiers who lost their lives while serving in France from 1917-1919. This solemn occasion also lent itself to a humorous, “lost in translation” moment – next to the seating for local citizens and veterans, members of the Minneapolis delegation were placed in a section titled “Personalities.”

Of course, being in France meant the wine flowed freely and we enjoyed many whites and reds from the nearby Loire Valley. When I remarked to one of our hosts from Tours that the wine was amazing, he simply looked at the bottle and replied, “Oh yes, that was a good year.” As an American, I felt honored that they celebrated our visit by cracking open one of the best varieties of their regional specialties.

As any trip to France does, it ended much too soon. While we said our goodbyes and merci beaucoup to our friends from across the ocean we renewed a commitment to our shared history and the values that transcend boundaries and define us both.

This entry was posted in Uncategorized. Bookmark the permalink.